Some simple games on Processing:)

Rules of play: The players usually count aloud to 3, or speak the name of the game (e.g. “Rock Paper Scissors!” or “Ro Sham Bo!”), each time either raising one hand in a fist and swinging it down on the count or holding it behind. On the fourth count (saying, “Shoot!” or “Sho!”), the players change their hands into one of three gestures, which they then “throw” by extending it towards their opponent. Variations include a version where players use only three counts before throwing their gesture (thus throwing on the count of “Scissors!” or “Bo!”), or a version where they shake their hands three times before “throwing.”

Story: Asian and American stories are quiet different, you can see here Rules of play: 1. The game is played on a grid that’s 3 squares by 3 squares.

Winning conditions: winner is a player whose draw takes 3 squares 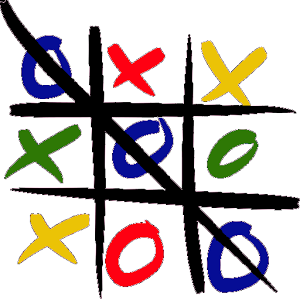 And also here is an animation